A Novel Approach to Mitigate the Opioid Overdose Epidemic: The OCRM Model

A Novel Approach to Mitigate the Opioid Overdose Epidemic: The OCRM Model January 04, 2022

Tens of thousands of people in the United States lose their lives each year to drug overdose, and the numbers continue to mount. Since 1999, approximately 841,000 such deaths occurred in the United States, while the number of drug overdose deaths increased 120% between 2010 and 2018 and totaled nearly 70,630 per year by 2019. During the COVID-19 pandemic, drug overdose deaths increased more than 20% in 25 states and the District of Columbia. Worldwide in 2019, around 36 million people suffered from drug use disorders.

Today, overdose death is a leading cause of injury-related death in the United States. To mitigate the opioid overdose epidemic, an evidence-based approach is needed and this approach should

·       target and reduce opportunities for access to illicit drugs;

·       use a collaborative multidisciplinary approach to improve responses to overdose incidents; and

·       have access to data for the development of mitigation strategies and the evaluation of outcomes.

Reducing the Accessibility of Opioids

Nearly 85% of drug overdose deaths involve illicit drugs such as fentanyl, heroin, cocaine, and methamphetamine, according to a recent study. Law enforcement efforts based on data from various resources are key to reducing the accessibility of illicit drugs.

Research has shown that a small number of prolific offenders control illicit drug markets and that drug-sale locations form hot spots, with a small number of addresses. Rigorous data analysis can help identify and dismantle the network of prolific offenders in the drug-sale hot spots, which in turn reduces the accessibility of opioids to experienced and novice drug users.

Identifying risk factors for drug overdose can lead to prevent overdose deaths. According to a recent survey, in more than 3 out of 5 overdose deaths, at least one potential opportunity to prevent the death through life-saving strategies was found.

(2)   focusing on prevention of initial drug use; and

Indeed, a collaborative and multidisciplinary approach is essential for the successful implementation of these outreach strategies. For instance, a recent study examined collaborative programs that involved local public health and public safety agencies in Massachusetts. These programs aimed to help overdose survivors by connecting them with harm-reduction and addiction-treatment services.

Through online surveys and interviews with police and fire departments in 351 Massachusetts communities, the researchers were able to identify four types of effective programs:

·       police visit (i.e., post-overdose visit to the survivor and to provide a referral to public health services),

·       clinician outreach (i.e., post-overdose telephone-based contact with the survivor), and

These outreach programs had in common the use of enhanced collaboration and information sharing among stakeholders to identify drug users and the use of timely and effective intervention efforts to prevent overdose deaths.

Access to reliable data is the key to success in an evidence-based policy. A recent study examined the core elements of successful overdose prevention activities in four states (Massachusetts, New Hampshire, New Mexico, and Utah) that managed to decrease their high rate of opioid-involved overdose deaths from 2016 to 2017 through the analysis of program narratives. The study found that access to drug-abuse data, the capacity to analyze the data, and the ability to disseminate the findings of the data analyses played vital roles in the four states’ successful overdose-prevention strategies. The findings were systematically disseminated through either web-based dashboards or quarterly reports. Drug-abuse prevention organizations in partnership with members of the local community then used the findings to create effective program models for the prevention of overdose deaths.

The Opioid Control and Reduction Model

To address the need for a novel and comprehensive approach to curbing the opioid overdose epidemic, we offer the Opioid Control and Reduction Model (OCRM), which is illustrated below. The OCRM suggests that comprehensive analysis of data from three sources (i.e., law enforcement, hospital emergency department, and pharmacies) can lead to successful collaborative outreach programs aimed at controlling the rise in and ultimately reducing overdose deaths and increasing the ability of law enforcement officials to identify prolific drug offenders. 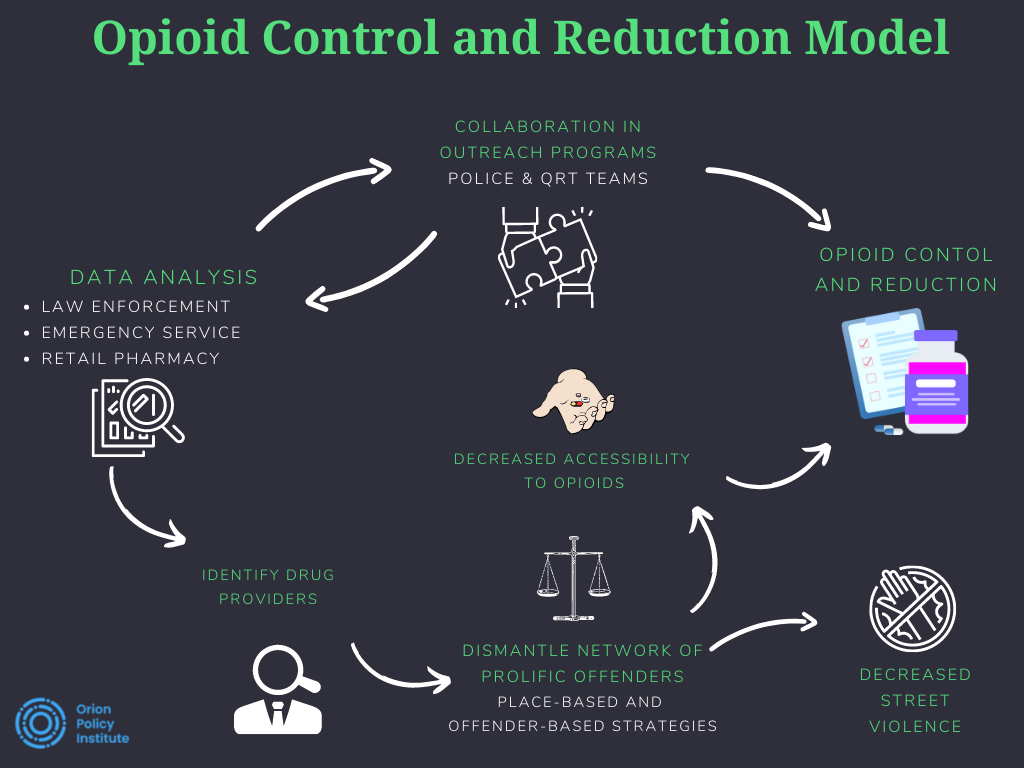 (2) identification and dismantling of illicit drug networks, and

The first step in the model is data analysis from at least three sources: law enforcement, hospital emergency departments, and pharmacies.

Spatial analyses showed a close relationship between drug points of sale and other criminal activities such as street robbery and prostitution. Place-based and offender-based policing techniques, can be used to limit access to opioids, reduce street violence, and dismantle the illicit drug network, thereby reducing the number of overdose deaths.

The OCRM also uses data from hospital emergency departments to increase the accuracy of information about police contacts with opioid users and identify individuals who need treatment and the support of an OCRM quick response teams. For example, when both sets of data identify an individual with a history of drug abuse, the police are notified and an OCRM quick response team contacts the individual to provide proactive intervention to reduce the chances of an opioid overdose and decrease the demand and market for the illicit drug.

The elimination of illicit drug networks alone may not be adequate to control the spread of opioids. Retail pharmacy data can be used to identify individuals who abuse their access to opioids intended for legitimate medical purposes. The analysis of the pharmacy data provides an opportunity to control the introduction and circulation of a medically legitimate drug for illicit purposes in the community.

First, the accessibility of illicit drugs will be reduced for experienced and novice users.

Second, the overall crime rate and the extent of crime victimization will drop because the violent and property crimes typically associated with illicit drug markets will be reduced.

The final step in the model calls for police to contact opioid users, gauge the users’ likelihood of overdosing, and provide the users with information about treatment options available in the community. A recent study in Cincinnati found that such contacts enable police to predict at least 10% of overdose victims before they overdose.

Current law enforcement practices for dealing with drug users typically involve arrests or citations. Under the OCRM, information obtained from police contacts with drug users can lead to the development of proactive and collaborative measures to prevent overdose deaths.

To achieve these outcomes, police must analyze the data obtained from their contacts with drug users and share the findings about potential drug-overdose victims with quick response teams (QRTs) that consist of police, firefighters, and addiction specialists.

QRTs are “pre-arrest diversion (deflection) programs that involve interdisciplinary overdose follow-up and engagement with survivors to link individuals to treatment during the critical period following overdose.” QRTs originated in Colerain Township, Ohio, and spread to communities across the country that have suffered significantly from opioid overdoses and overdose deaths.

QRTs play a vital role in the OCRM because the teams focus on providing opioid users with treatment options rather than seeking to arrest and label them as criminals. The information obtained from these interactions can help state governments to better understand the scope of the overdose problem in their jurisdiction and develop programs that can prevent overdoses and thus prevent overdose deaths.

The QRTs also collect opioids users’ data on various aspects of drug abuse, such as how the individual started using opioids, whether the individual’s friends use opioids, how the individual acquires opioids, and what kind of opioids the individual uses. The information is then added to the database pool for daily analysis and a better understanding of the extent of the opioid problem in real-time.

We provide the following recommendations for a successful implementation of the OCRM:

·       All stakeholders (i.e., policymakers, police, fire departments, health-care systems, addiction professionals, and pharmacies) must be committed to contributing to this model through ongoing communication, information sharing, and the provision of necessary resources.

·       For enhanced collaboration, the stakeholders must meet regularly to discuss the needs of stakeholders that adopt the OCRM and the challenges that first responders face when implementing the model.

·       An oversight committee must be established with the involvement of policymakers and management representatives given responsibility for providing solutions to challenges that arise for one or more stakeholders.

·       The roles and responsibilities for data sharing, data analyses, and the QRTs should be clearly identified and communicated to all partners through a program manual.

·       Data-sharing agreements should be signed by all OCRM partners to ensure that the necessary data are included in the databases and that comprehensive data analyses are conducted to guide QRT outreach efforts and law enforcement tasks related to opioid users and opioid overdoses.

·       Data-sharing agreements and protocols should clearly describe data-use guidelines, including:

o   prohibitions against use of the data in its raw form or the results of the analyzed data in any way that could lead to adverse consequences for persons named in the database, such as eviction, stigmatization, and social control;

o   protection of privacy rights and consequences for violations of those rights;

o   the use of unclear descriptions of data sharing processes that might deter individuals at highest risk for overdose from calling for emergency assistance.

A formal program evaluation must be conducted on a regular basis (e.g., annually). Such evaluations should include an evaluation of outcomes through quantitative and qualitative research methods. Modifications to how the model is implemented should be made as deemed appropriate at the end of the program-evaluation process.

Systematic reviews and meta-analyses of the OCRM as implemented must be conducted to ensure that the model is effective in mitigating the opioid overdose epidemic.

Dr. Murat Ozer is an Assistant Professor at the School of IT, University of Cincinnati. He is a crime analyst and cybersecurity lecturer. He also works with Cincinnati Police Department and develops certain web-based predictive analytical systems. His research interests are primarily in managing big data sources of law enforcement agencies to generate predictive data analytics for various public health problems such as gun violence, and opioid overdoses. He is also co-founder of Peel9, a record management system and data analytics company.

Professor John Wright is a Professor at the Criminal Justice Program, University of Cincinnati. He subsequently served five years on the faculty at East Tennessee State University. Dr. Wright’s work has sought to integrate findings from a number of disciplines, including human behavioral genetics, psychology, and biology. He has published over 200 articles and book chapters and was recently judged to be one of the most prolific and most-cited criminologists in the United States. Dr. Wright consults with states and local jurisdictions and is a much sought-after lecturer.

Op-Ed | How to deal with young adult offenders is currently one of the most important areas of justice reform. The criminal laws of most European countries provide for special arrangements to be made
Read More

Research | This article explores Iraqi women's civic and political activism since 2011, with an emphasis on the women's movement in Iraq since the 2019 October Revolution.
Read More

Research | Tunisia is the first case study in our research series. Here, we analyze Tunisian women's civil and political activism since 2011, though the primary focus is on their activism since 2018.
Read More