Relations between Turkey and Qatar have flourished within the past decade, particularly after the 2017 Gulf boycott against the latter. Yet efforts by Ankara and Doha to normalize diplomatic relations with Gulf countries and Egypt raise doubts about the future of bilateral relations between Turkey and Qatar. For sure, neither Turkey nor Qatar have any interest in ending their mutually beneficial bilateral relations.

Nevertheless, as the geopolitical and ideological tensions have cooled down since the January 5 announcement by Saudi Arabia, Bahrain, the United Arab Emirates, and Egypt that they would lift their embargo on Qatar, Turkey-Qatar relations might not be as vigorous and progressive as they had been.

Thanks to the situation in Afghanistan, Turkey and Qatar have once more appeared as diplomatic middlemen between the international community and actors in Afghanistan. Turkish Foreign Minister Mevlut Cavusoglu met with his Qatari counterpart, Sheikh Mohammed bin Abdulrahman bin Jassim Al-Thani, on September 10 to discuss Afghanistan. Nevertheless, despite this meeting, high level diplomatic contacts between Ankara and Doha have slowed down since the Gulf Cooperation Council (GCC) summit in al-Ula in January of this year, as shown in the graph.

Qatari decision makers have always been Turkish government’s closest diplomatic partners throughout the Justice and Development Party (AKP) period, and the 2017 boycott increased the frequency of those contacts. The new political atmosphere in the region, however, has caused what appears to be a quiescence in relations between the two countries. In the first eight months of 2021, Turkey and Qatar engaged in only three high-level in-person contacts and fewer than the number of such contacts in 2020 face-to-face meetings were halted amid the COVID-19 pandemic. 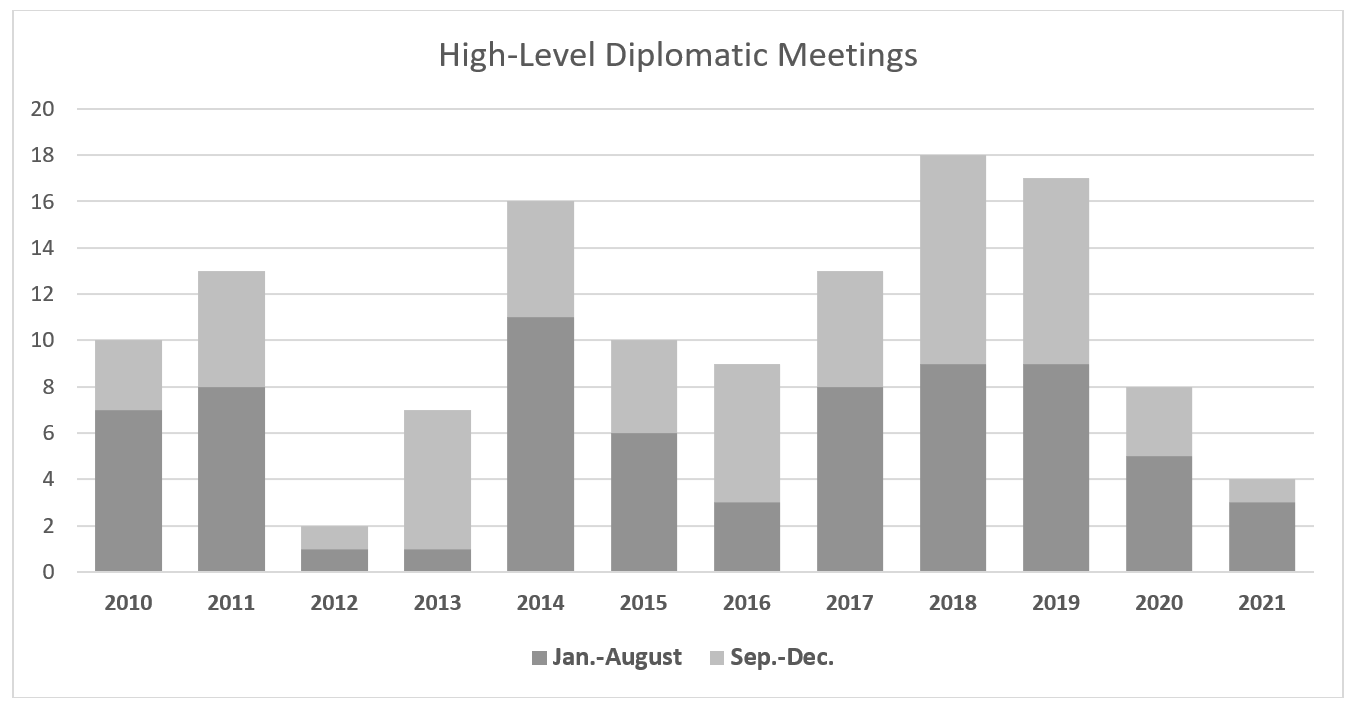 In July, the emir of Qatar, Shaykh Tamim bin Hamad Al Thani ended the assignment of Salem Mubarak Al-Shafi as the Qatari ambassador in Ankara and appointed him instead to be Qatar’s ambassador in Cairo. Though changes in ambassadorial appointments are common and rarely are cause for alarm, Al-Shafi had an eight-year tenure in Ankara, which is a long period for ambassadors. The appointment of Al-Shafi to Cairo, however, carries a deeper political meaning in terms of Doha’s perspective on regional diplomatic relations. After all, Al-Shafi was the person who had been assigned to manage relations with Qatar’s most important regional ally, and he played a significant role in improving bilateral ties both through his cordial relations with the Turkish government and his highly engaged public diplomacy. His tenure witnessed significant events, including the 2016 coup attempt in Turkey and 2017 boycott of Qatar. In this respect, Al-Shafi’s appointment to Cairo reflects the importance that Qatar’s leaders attach to improving relations with Egypt—a country whose diplomatic value is obviously not less than Turkey’s.

It is possible to offer few reasons for this quietness in Ankara-Doha relations. The first possibility is that neither Ankara nor Doha wanted to irritate Riyadh and Cairo by reviving the image of a so-called Turkish-Qatari regional bloc that could undermine ongoing efforts to normalize diplomatic relations. Turkish political, economic, and military expansionism in the Gulf and the Horn of Africa is among the issues that triggered the Arab countries’ negative reaction against Turkey and Qatar. Riyadh, Abu Dhabi, Manama, and Cairo all blamed Doha for facilitating Turkish interventionism in the region; therefore, Turkey and Qatar might have wanted to assume a low-profile in their bilateral relations—at least for a time.

Broader geopolitical dynamics are also potential reasons for this slowdown in relations. For example, tensions with other Gulf countries served to consolidate a marriage of convenience between Ankara and Doha. After the 2017 boycott, the diplomatic isolation that Turkey and Qatar suffered, left both countries with little choice but to strengthen their bilateral ties. The cultivation of closer ties with Riyadh, Cairo, and Abu Dhabi, however, could reduce Ankara’s and Doha’s dependence on each other. From Ankara’s point of view, for instance, Saudi Arabia, Egypt or Emirates have more to offer Turkey in terms of their economic heft and political influence. In this respect, successful normalization of relations with these three countries might shift Turkey-Qatar relations back to its natural level, namely the pre-2017 boycott period. At the same time, concerns about the future of AKP government might have encouraged Doha to hedge its bets by investing in closer relations with Egypt.

The personal relationship between Erdogan and Qatar’s Shaykh Tamim has been the driving force behind of the bilateral relations; therefore, if the government in Turkey were to change hands, then the Ankara-Doha relations could lose its dynamism. The Turkish opposition’s electoral success in 2019, the deteriorating Turkish economy, the intra-AKP divisions, the government’s mishandling of natural disasters, and consequently growing popular dissatisfaction with the AKP government have increased this possibility despite Erdogan’s image of invincibility. Moreover, Doha is aware that the Turkish opposition has a profound antipathy toward Qatar and see the Qatari leadership as being complicit in Erdogan’s plunder of country’s wealth and resources. Hence, it is highly possible that Doha would want to decrease its political reliance on Ankara by diversifying its relations with other countries.

Diplomatic relations rarely turn into a zero-sum game; therefore, Qatar’s normalization of relations with Riyadh and Cairo does not straightforwardly mean an end to the Turkish-Qatari partnership. Particularly after the 2017 crisis, Qatar and Turkey have achieved significant improvements in economic, political, cultural, and military ties. Indeed, Taliban's rise in Afghanistan has opened a new window of opportunity for both countries to act as mediators between Kabul and the international community.

In a further indication that Turkey and Qatar do not plan to sever their countries’ diplomatic ties, Doha appointed Mohammed bin Nasser bin Jassim al-Thani as Qatar’s Ambassador to Turkey. Al-Thani was Qatar’s ambassador to Libya and attended a Turkey-Qatar-Libya meeting in Tripoli last year in Tripoli where the Turkish delegation was led by Defense Minister Hulusi Akar. This indicates that Doha intends to maintain its cooperation with both Turkey and Libya.

Moreover, new regional crises, such as those in Tunisia and Afghanistan, could rekindle old ideological and geopolitical rivalries and thereby damage recent reconciliation efforts between Qatar and its Gulf and Arab-country neighbors—a situation that could prompt Qatar and Turkey to go back to their mutually beneficial partnership.

The post-al-Ula Gulf does not simply mean a rupture in Turkish-Qatari relations but scaled-back bilateral ties reflect the changing geopolitical conditions in the region which could last in the foreseeable future.

Hasim Tekines previously worked in the Turkish Ministry of Foreign Affairs and Prime Ministry. He is currently an MA student at Leiden University focusing on Middle East Studies.

Political Astroturfing in Twitterscape: The Role of Troll Armies in Turkey's Democratic Backsliding

The Role of Troll Armies in Turkey's Democratic Backsliding. The current report aims to shed light on various aspects of the AKP’s political astroturfing campaigns by conducting an in-depth analysis
Read More

Op-Ed | Relations between Turkey and Qatar have flourished within the past decade, particularly after the 2017 Gulf boycott against the latter. Yet efforts by Ankara and Doha to normalize diplomatic r
Read More