Is Relying on Military Interventions against Terrorism an Ineffective Strategy to Eradicate Insurgency?

Is Relying on Military Interventions against Terrorism an Ineffective Strategy to Eradicate Insurgency? July 26, 2021

In the hotspots of terrorism and insurgency, responding to terrorism by relying heavily on hard power such as military and police responses is not effective to reduce terrorism in these locations.

The theory behind the use of hard power against terrorism draws on deterrence, retribution, and incapacitation. In theory, terrorism is viewed as a violent act that needs to be deterred by increasing the risks and punishment for potential perpetrators, and military operations would give the message that the next terrorist act is costly to carry out. Furthermore, a military intervention would lead terrorists to face what they deserve while terrorist killings incapacitate the group members from the next attack.

However, studies on the effectiveness of military operations to prevent insurgency and terrorism run counter to the theory in many countries such as the United Kingdom, Israel, Sri Lanka, Peru, Iraq, and Turkey.

There is a variety of explanations of why a military response would not solve an insurgency and terrorism issue. First, a military response increases the likelihood of indiscriminately targeting non-combatants and innocent individuals. For instance, 59,245 civilians were killed in Iraq’s 104 districts only between 2004 and 2009 during the military interventions of the coalition forces. Second, it causes human losses and physical destruction, and change in cityscapes. Especially the children who are exposed to the conflict grow up with the memoirs. Therefore, third, the indiscriminate targeting causes new grievances in the population of a particular ethnicity or religious group and turns into retaliation in the long run. Even, ethnic differences between the actors in any given conflict are likely to turn the struggle from armed confrontations into the wholesale slaughter of civilians who are perceived as enemies.

Last but not least, military intervention does not result in a decline in the number of terrorist attacks subsequently. Let us take ISIS terrorism as an example. Hotspots of terrorism exist around the world, and Syria and Iraq have been the areas with the highest risk of terrorism. Currently, ISIS poses the most significant terroristic threat to Western societies. The group even managed to control territories in Syria and Iraq which were equal to the United Kingdom. Following military strikes by a U.S.-led coalition of military forces, on November 19, 2018, U.S. President Donald Trump declared that ISIS had been defeated and its lands were taken back.

However, ISIS increased its activities and the volume of its attacks in 2020 in Syria. Based on data from the Armed Conflict Location and Event Database (ACLED), Figure 1 below shows the upward trends in the number of Islamic State events outside the Syria and Iraq region. In 2019, the number of ISIS attacks was on the rise outside Syria and Iraq region. For instance, ISIS carried out 290 attacks in Cameroon in 2019, a significant increase from 156 attacks in 2018. It is also worth remembering that ISIS operates on a global scale, and 18 groups are affiliated with ISIS in 31 countries around the world. 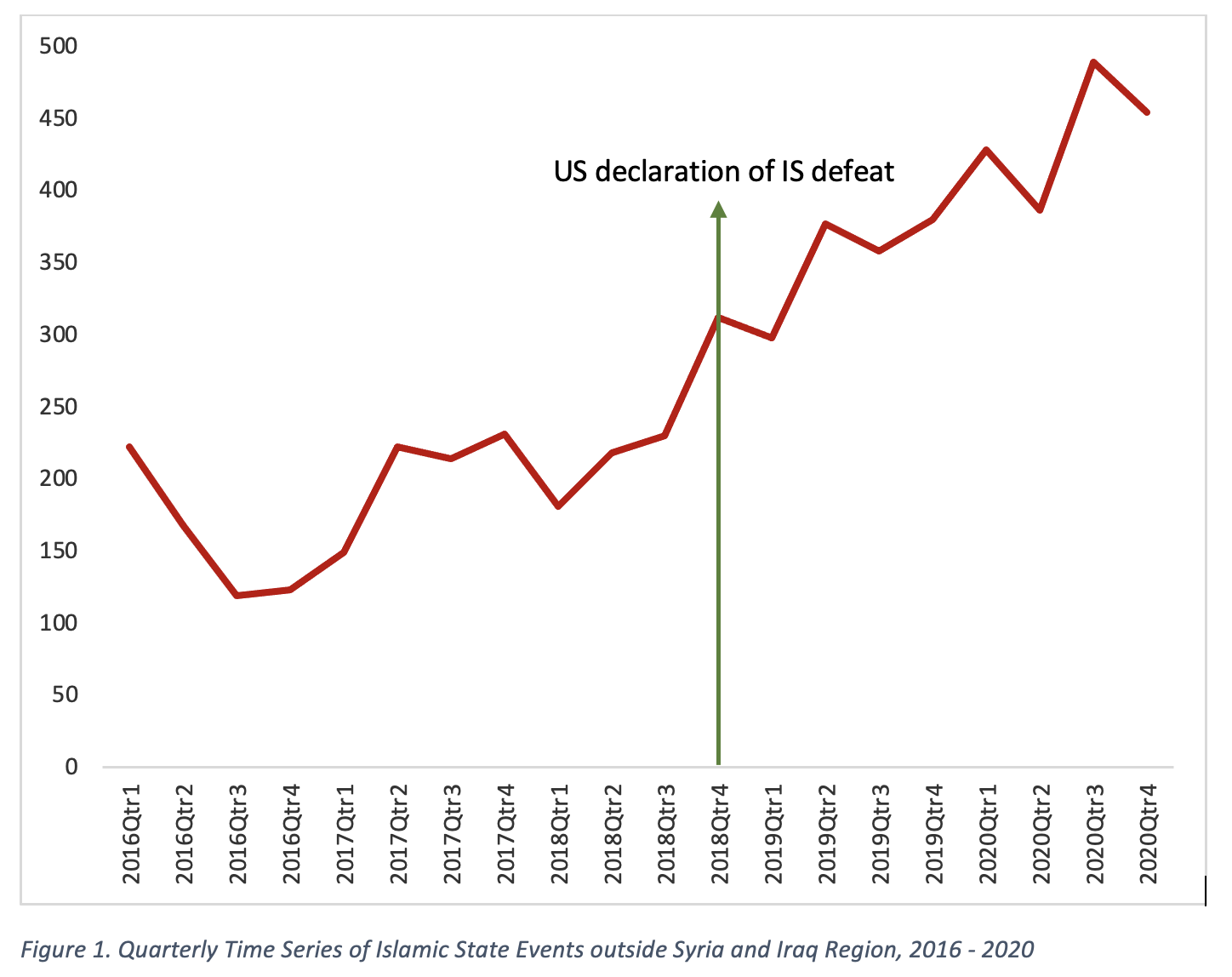 ISIS is an insurgent group. Any insurgency uses terrorism as a tactic but also receives support from localities, which makes it difficult for governments to distinguish between those reinforcing terrorism and the ones expressing grievances of the population at risk of insurgency. In fact, responding to terrorism in the form of a military intervention increases the risk of harming innocent people or devastating their towns. For example, the U.S., British, French, and Australian airstrikes in Mosul to fight against ISIS arguably caused thousands of civilian deaths in 2016 and 2017. In a similar case, 545 civilians were killed since July 2015 during confrontations between the Turkish military and the PKK (the Kurdistan Worker`s Party).

On the other hand, relying heavily on military power could lead to ignoring the underlying causes that help the insurgency survive, if not expand its area of activities. The hotspots of terrorism suffer from the weakness of governance in these regions. People in these areas where the insurgency is a protracted problem have actually been in need of services other than military operations. More specifically, they need government support in education, employment, agriculture, production, and so on.

Since 1978, the United States has been using military forces abroad. However, the US government should be wary of relying on military interventions and operations that may target an area with its population indiscriminately.

In insurgency-ridden places, the goal can be to provide essential services to people in need through already established mechanisms such as the Global Coalition Against ISIS whose mission is also to change the conditions that are conducive to the spread of terrorism. Such global initiatives may aim to reinforce further governance at a local scale along with support to local NGO networks while limiting foreign interventions backing up the insurgent groups.

Withdrawal of US Military from Afghanistan: Risks and Responses

The withdrawal of US military from Afghanistan has been on the presidents’ agenda over the last decade. The decision to actually do so, however, has been delayed multiple times because of the U.S. con
Read More

Is Relying on Military Interventions against Terrorism an Ineffective Strategy to Eradicate Insurgency?

Op-Ed | In the hotspots of terrorism and insurgency, responding to terrorism by relying heavily on hard power such as military and police responses are not effective to reduce terrorism in these locat
Read More

Limitations of Security Sector Reform in Countering Al-Shabaab in Somalia

Op-Ed | Over the past few years, al-Shabaab’s insurgency in Somalia has gained strength despite the significant amount of foreign assistance dedicated to security sector reform (SSR) in the country.
Read More

Op-Ed | The comprehensive sanctions on the Maduro administration have become the centerpiece of the U.S. strategy for Venezuela. Yet, "maximum pressure" policy revolved around sanctions dramatically d
Read More