Turkey’s ruling coalition, the Justice and Development Party (AKP) and Nationalist Movement Party (MHP), pursues new legislation that muzzles dissident voices on the Internet and social media as Turkey heads into another election cycle. Contrary to how the bill is presented as a legal framework against disinformation and misinformation, it will empower AKP troll armies even further and dominate the social media domain.

The parliament’s Justice Committee has recently approved the so-called “disinformation” bill, which now awaits a vote in the general assembly and is expected to pass with a simple majority. The government claims that the new legislation is needed to prevent “fake news, disinformation, provocation and lynch justice in the social networks, while President Recep Tayyip Erdogan portrays social media as a “threat to democracy.” Never one to countenance criticism of himself or the government, Erdogan’s concerns about the content spread through social media are not surprising. Nor is it surprising that the bill was announced just as the country braces for a critical election next year.

Erdogan’s 20-year tenure as president of Turkey and head of the AKP has been marked by the creation of a government monopoly over the traditional media. According to a Freedom House report published this year, “more than 90 percent of Turkish media networks depend on public tenders and are owned by large businesses with close personal ties to President Erdogan.” Opposition politicians and government critics, who have found limited or no public space in newspapers and on TV channels, had to move their critical voices to alternative digital and social media platforms. These platforms, such as Twitter and YouTube, have enabled the opposition to circumvent (though in a very limited way) the AKP’s censorship of media and other information platforms that dare to tell the public about the party’s transgressions or express opinions that run counter to the government’s propaganda.

The AKP government has already enacted laws “to censor and block access to online media that are critical of the government’s policies.” The Freedom House report notes that after “the passage of a restrictive new law in 2020, major social media companies such as Facebook, Twitter, and YouTube were forced to open offices in Turkey that would comply with government content takedown demands.” With the new legislation, the government aims further to restrain the freedom of speech on social media and bring harsh penalties for those who publicly disseminate false information regarding national security and public order with the motive of creating fear and anxiety will be sentenced to imprisonment from 1 year to 3 years.

As general elections are around the corner, Turkey is struggling with a deepening economic crisis and growing public dissatisfaction.  Public trust in Erdogan and his policies have been eroding because of rising inflation, devaluation of the Turkish lira, and rising unemployment. Controlling the narrative and dominating the public debate had never been more critical for Erdogan and his party.

To win the upcoming elections and maintain his power, Erdogan has two options: find a quick fix for the Turkish economy or resort to heavy-handed tactics against the opposition. Because Erdogan lacks a viable solution for ending the country’s economic crisis, he has resorted to the only tools he has left in his toolbox: intensifying the government’s crackdown on the leaders of the main opposition bloc, stepping up the repressive measures taken against dissident voices, and controlling the narrative on social media under the pretext of fighting against disinformation. These are the moves of a desperate leader who falsely claims that social media is one of the main threats to the survival of democracy in Turkey.

In Erdogan’s words, the bill aims to “prevent the spread and systematic spread of fake news and disinformation” and bring “new regulations and responsibilities for social network providers, social media companies and users against disinformation activities.” Yet, ironically, the AKP has been operating one of the largest state-backed troll armies, the so-called AK-trolls, since early 2012 to manipulate the public through disinformation campaigns and fake news. In June 2020, Twitter took down more than 7,000 AKP-backed troll accounts.

As social scientists, we analyzed the archive of Turkish state-backed troll accounts identified by the Twitter Transparency Center. We examined the account characteristics and their narratives and found an increasing trend of creating AK-troll accounts before elections. The 2019 local elections, for example, coincided with the largest surge in the number of new troll accounts (as seen in Figure 1). In addition, the AKP ramped up the size of its troll army in response to major events that posed extraordinary challenges to the AKP government, such as the Gezi Park protests (2013), the government corruption investigations (2013), the Kobani protests (2014), and the July 2016 coup attempt. The operators of the troll accounts coordinated their efforts to dominate the public discourse, set the public agenda in accordance with the best interests of the AKP administration, and vilify and discredit political discontents. To disseminate their messages across the political spectrum of Turkish society, many of these troll accounts were given a variety of political identities, including pro-Erdogan, Kemalist, Nationalist, and pro-Kurdish. 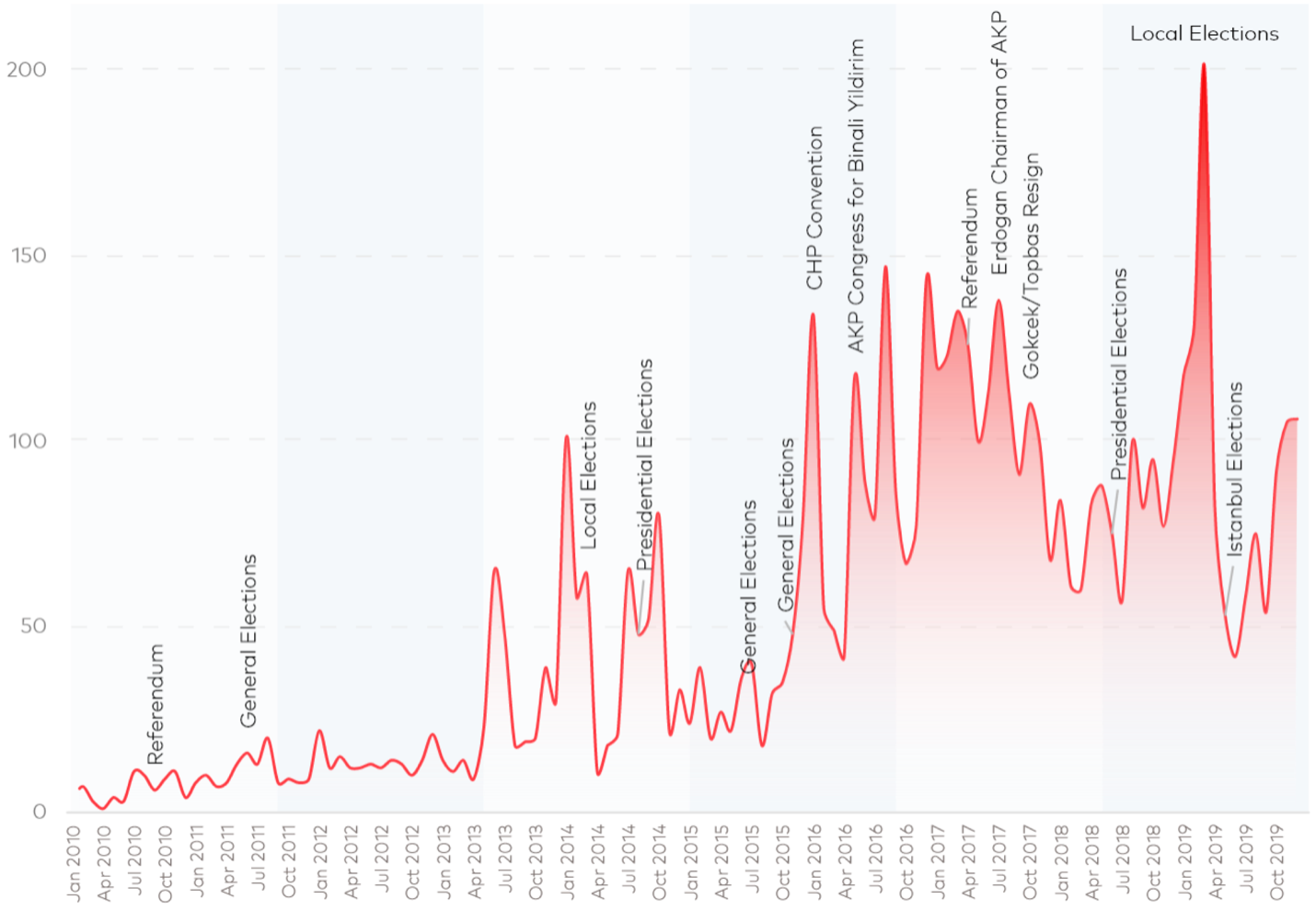 Figure. The number of new troll accounts created per month that corresponded to elections, January 2010 through October 2019.

The AKP’s disinformation bill mimics Russia’s attempt to clamp down on social media in the wake of its invasion of Ukraine. The Russian government, the biggest spreader of disinformation, unleashed draconian legislation against fake news, which led to an all-out assault against critics of the war and criminalized “public dissemination of false information under the guise of truthful messages” about the Russian military and officials serving abroad. Violations of the law are punishable by a prison sentence of up to 15 years. The proposed law is intentionally vague, thereby enabling the government to decide whether someone is guilty of spreading falsehoods, and severe measures are adopted in the punishment of violators, typically dissident voices the government wants to silence.

The proposed law also implicitly allows the AKP-troll armies to dominate the public discourse on social media, even when trolls intentionally spread lies. The AKP will not shut down these social media accounts and instead will use the proposed law to justify the creation of a state censorship mechanism that it can weaponize for partisan advantage and control the agenda before and during next year’s elections. The aim is to deprive the opposition of access to media platforms they could use to inform the public about the wrongdoings and irregularities of Erdogan and his party throughout the elections process.

The question that begs an answer is: Why is Erdogan so touchy about social media? Political survival. In his own words, “Media and communication issues and the fight against social media and disinformation are of vital importance in terms of ensuring our political and social survival.”

The article was first published in The National Interest.

Political Astroturfing in Twitterscape: The Role of Troll Armies in Turkey's Democratic Backsliding

The Role of Troll Armies in Turkey's Democratic Backsliding. The current report aims to shed light on various aspects of the AKP’s political astroturfing campaigns by conducting an in-depth analysis
Read More

Could Erdogan’s Charm Offensive Open a New Chapter with Israel?

Op-Ed | When Israel President Isaac Herzog visited Turkey in early March, it was a victory of sorts for Turkish President Recep Tayyip Erdogan, who welcomed his Israeli counterpart with open arms.
Read More